Here are Ed Lewis’ articles and a book on the history of science, current research on plasmoids and ball lightning, how scientific revolutions cause economic depressions, Kondratiev waves and other topics.

Many of articles on the site (see the links in the “Economics Articles” page) and my book (see “Book” link above) explain why economic depressions happen every 40 or 50 years. This pattern of depressionary eras is called the Kondratiev long wave. The theory has proven to be mainly accurate up to now for 30 years, and back in the 1990s, I was predicting a depressionary era of the 2010s and early 2020s that we are in the midst of still.

In the 1990s by using this economic theory, not only did the model predict the timing of the start of the depressionary era about the year 2009, I also predicted the kind of depression this would be: a technological acceleration depression like the 1930s Great Depression associated with rapid technological progress and rising industrial productivity growth rates. The depressionary era we are facing now in this decade of the 2020s isn’t a low productivity growth industrial revolution depression or deep recession such as what happened in the 1890s or the 1970s and early 1980s.

About half of the information on this site is about the physics topics of plasmoids, microplasmoids, ball lightning, cold fusion and related phenomena. By reading the articles in the Physics Articles section, you will learn about how plasmoids behave and why transmutations occur in the various experiments that are described. More and more, I am writing about the health effects of micro ball lightning and microplasmoids as more pertinent information is published. All these phenomena are part of a new set that began to be produced mainly during and after the 1970s and 1980s.

The economic model presented in my papers and the book was developed in 1990, and it has proved accurate so far. It predicted the 2010s-2020s economic depressionary period and the productivity growth spurt that started in 2000.

The book offered for reading is a long manuscript written mainly in the 1990s. It is in html form, and I did a little updating and editing. It has a detailed history of science and my original economics and physics ideas. I tie all these seemingly disparate topics together in a logical framework to show why scientific revolutions happen at 80 year intervals and how this pattern works out to produce the Kondratieff long wave cycle. You can read it for 19.97 USD. You can use the pay pal link preset for 19.97 or just contact me for getting the password for it. See Reading My Book Online.

History of Science and Economics Research 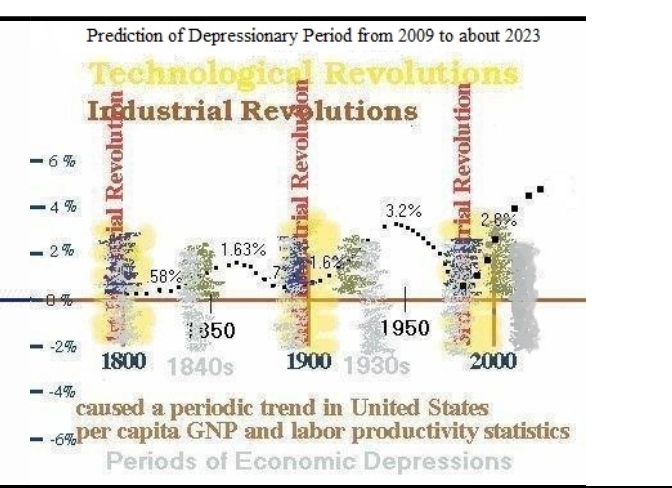 20140109 – Video presentation with Gary Hendershot
I also write about the history of the development of physics and science through paradigm shifts. There were 6 such paradigm shifts from Copernicus in 1506 to Einstein in 1905, and the current paradigm shift that got started in 1989 is the 7th paradigm shift. I call the new paradigm the “Plasmoid Paradigm.” In many papers and the book, I explained why paradigm shifts happened periodically via a logical and simple model. Then, I tried to explain how the periodic nature of technological development causes the Kondratiev wave, the approximately 40 year long economic cycle described by Kondratieff in the 1920s and by Joseph Schumpeter in the middle of the 20th century. 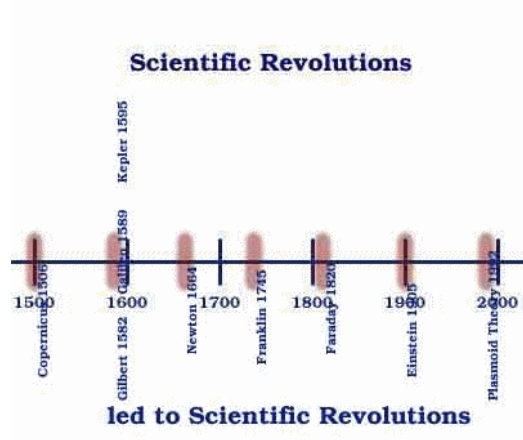 20140213 – Ed Lewis, The Plasmoid Paradigm and the Current Depression Period

In this video with Hendershot and Moray King, I described anomalous plasmoid phenomena ranging in size from sub micron size to planetary plasmoid markings. Plasmoids are a state of matter. Naturally existing plasmoids are ball lightning, and they vary in size to be more than a kilometer, but usually people see them ranging in size from tennis ball to basketball sizes. Many articles on the Physics Articles page delve into the evidence of the anomalous behavior of plasmoids and their existence in transmutation and energy production experiments.

In my newest article in 2021, I write about their health dangers and discuss experimental results on their effects on plants. In old articles, I tried to show that tornadoes are large atmospheric plasmoid phenomena and write about the various anomalous natural ball lightning effects. Studying natural ball lightning phenomena helps people to understand experimentally produced microplasmoids.

This entry was posted in Uncategorized. Bookmark the permalink.