The book explains that there is an 80 year periodicity of scientific revolutions in physics and that this causes the Kondratiev wave. The Kondratiev wave is also called the economic long wave. It is the 40 or 50 year timing of major economic depression and recession periods. I wrote most of this book from about 1989 to 1993. The model of economic depressions described in this book predicted the starting date of this current depression period that started in 2008 to within a year though I first wrote up the theoretical model described here in 1989.

The chart shown at the top of the webpage and below was mostly made about 2001, and the Abstract  and summary of the book was written in the middle 1990s. So though it was written in the early 1990s, this model of economic depressions correctly predicted a depression period for this decade of the 2010s and the early 2020s preceeded by an economic boom starting about the year 2000. So the book I wrote almost 30 years ago predicted the major economic and scientific events well including the current 2010s depression period and when it would begin.

After the 2008 stock market crash, about 10 trillion dollars of added government debt in the US alone accompanied by unprecedented stimulus spending followed by about an extra trillion a year in the US from about 2012 until early 2020 made the US maintain a level of standard of living. Now in the late summer of 2021, US government debt is well over 30 trillion dollars with trillions more planned to be added to the national debt in the next year!! But the world economy is still in a depressionary era. The spending staved off the full effects of deep recession or depression until now. Otherwise, the 2010s would have been more like the 1920s. I still think that for many countries, the severe effects of the recession/depression will be noticeable some day, but many trillions of debt added lately to the US national debt is staving off deep depression as of 2021. I do not know how long depression or deep recession will be put off by this method. Maybe no one does.

I started editing and updating the book about 10 years ago. Chapter 1 and Chapter 2 explain the theory for why the physics has an 80 year periodicity of paradigm change. Chapter 2 is a history of science and has a summary of the development of the current plasmoid paradigm that I wrote in the 1990s. I am planning to update this chapter, God willing, to include how the plasmoid paradigm has developed i the last two decades. The general theory when applied to economics in Chapter 3 and Chapter 4 explains why the long wave of economic depressions happens. It also explains why two different types of depressions alternate every 40 or 50 years.

When I first started blogging and writing about this idea on the early internet in the 1990s, people who believed in long-waves couldn’t see it. In the late 1990s, some people were predicting that the long wave depression was imminent (that it would start in the year 2000 or so) based on their ideas about a 50 or 60 year cycle. They thought that since the Great Depression started in 1929, a deep depression period was due to happen by 1999. They didn’t understand that the deep recession of the 1970s was a Kondratiev dip and that the timing between the long wave troughs is usually about 40 years unless something unusual happens. 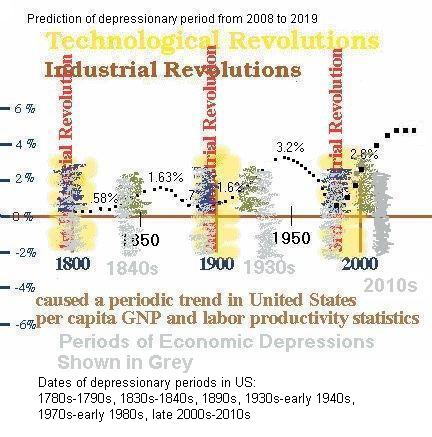